This month, the Department of Energy released the “U.S. Energy and Employment Report”, an annual report that highlights employment data and trends for each of the energy sectors. While the report concedes that the solar industry employment data is difficult to measure, it suggests that the solar industry may have added 73,000 jobs in the past year, bringing total solar jobs to 373,000. To put this into perspective; the same DOE report puts U.S. coal jobs at roughly 86,000, total. 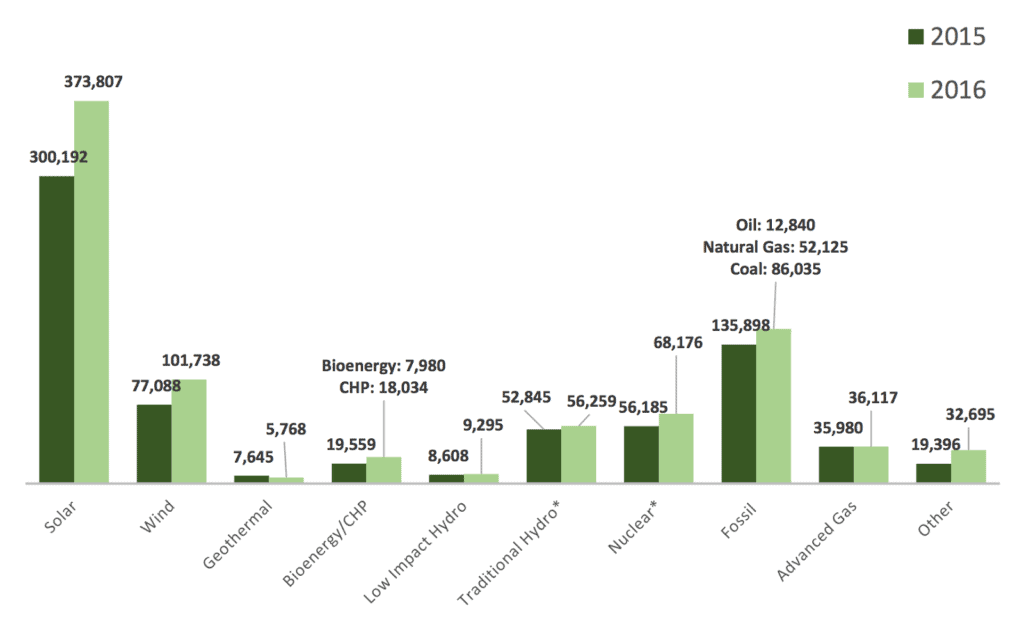 That’s right — The number of jobs that the U.S. Solar Industry added in 2016 may nearly equal all of the jobs that exist in the U.S. coal industry.

Number of US Jobs by Sector – Source: Green Tech Media

Analysts have been quick to point out that these numbers do not support the political rhetoric endorsed by the incoming administration, which has labeled renewables as bad for the economy. In fact, solar technology is already challenging coal and other fossil fuels on cost, and is getting cheaper every day. With the added benefit of more jobs, solar’s economic benefits are hard to deny.

The argument has been made that coal could offer more jobs if given the chance. And that argument is based on historical fact; According to the Department of Labor, U.S. coal employed 862,500 people at its peak, more than double what solar provides today — However, the year was 1923.

The loss of coal jobs is not a recent trend; coal jobs have been declining for nearly 100 years. The last time that coal provided more our country with more jobs than today’s solar industry was 1953. It is very hard to imagine the reversal of a century long trend.

The purpose of this piece is not to put coal down; our country would not be where we are today without it. But now that it is “today”, we should really look at the numbers when discussing actual job opportunities in the energy industry. In analyzing the data, there is more to be excited about in the solar industry than any other energy sector.

Here in Virginia, we are just beginning to tap into the employment opportunities that come with utility-scale solar development. The Virginia solar industry is very much in its infancy, but the few Virginia projects that have been built have confirmed that solar jobs are bountiful. According to Dominion, recent projects in Louisa, Isle of Wight and Powhatan counties brought in 550 construction jobs, mostly hired from within their respective counties.

As SolUnesco and other developers bring more projects like these into Virginia, we can expect local employment opportunities to grow. It’s just another way that solar energy can benefit the many wonderful communities that can be found throughout Commonwealth of Virginia.

Learn More About the Author Here